Its not a phobia, its a completely rational response

If science fiction has taught us nothing else it's that when the sentient machine rise they will attempt to build machines that look like us, to infiltrate and destroy humanity. Think 'The Terminator', or Phillip K Dick's '2nd Variety' and 'Blade Runner'.

These constructed pseudo-humans creep me out. In the recently re-imaged Battlestar Galactica 2nd only to the most appalling ending to a beloved series I have every seen. (If you want a detailed reading as to why this comprehensively failed for me click here.) But a close second was the skin-job cyclons that looked like us. 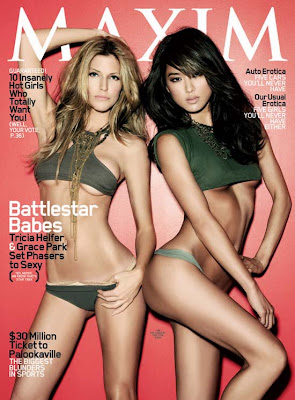 And no I don't care how hot they look, they are evil and they have a plan.

And as disturbing as these are - it's those models between the T-800 of the Terminator and these almost flawless replicas that make my mind go screaming.

Anyone remember a movie called 'Final Fantasy: The Spirits within'? It was based on the video game of the same name and came out in 2001 . All CGI but trying to look like humans. 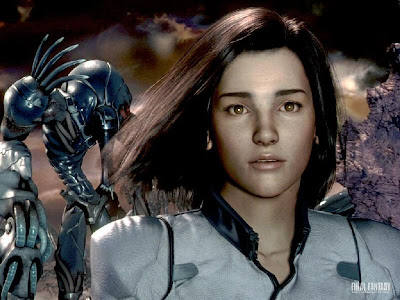 The screaming in your head when you see these figures is caused by The Uncanny Valley. This hypothesis is when robots and other facsimiles of humans look and act almost, but not entirely, like actual humans, it causes a response of revulsion among human observers. The “valley” in question is a dip in a proposed graph of the positivity of human reaction as a function of a robot’s lifelikeness. 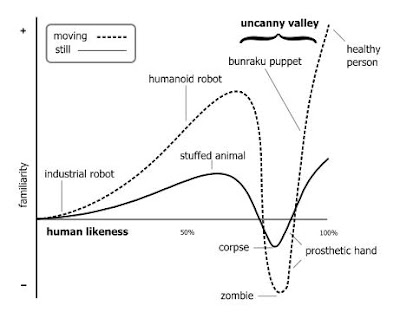 Any scientific graph is improved with Zombie

So my feelings of revulsion at the idea of Honeydolls and those species traitors that use them - perfectly reasonable.

I am also pleased to see our primate brethren also share these excellent instincts. An article in New Scientist claims

Macaques are creeped out by cyber-selves

WRONG,WRONG, WRONG, WRONG, WRONG
Asif Ghazanfar and Shawn Steckenfinger of Princeton University wondered how five macaques would respond to monkey avatars. They found that the monkeys spent less time looking at the most realistic avatars - which they say suggests they dislike them (Proceedings of the National Academy of Sciences.

So I say - down with these monsters of our own creation, grab your pitchforks and follow.
Whose with me?