Its the debate we had to have

For those who aren't aware the zombieapocalypse is a subset of Eschatology. This is a part of theology and philosophy concerned with the final events in the history, the ultimate destiny of humanity, commonly referred to as the end of the world.

and while much has been written, sung and painted about Armageddon and don't get me started on those who talk about wanting to "immanentize the eschaton" never have I seen the post-apocalyptic wasteland more lovingly portrayed than in the computer game Fallout3. 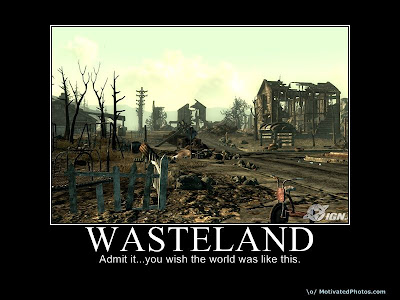 but the question has to be asked

"Are these games really preparing our children for the post-apocalyptic wasteland, thank goodness the team at 'The Onion' have been tackling this vital topic.


Are Violent Video Games Adequately Preparing Children For The Apocalypse?

"grenades are more effective at taking out cyborgs than automatic weapons"

I think there is a lesson there for us all.
Posted by Unknown at 4:37 PM 10 comments:

Okay Japan you and I need to have a talk

I want to start by saying you have given me a lot to be thankful for:

Miyamoto Musashi's Book of Five Rings. A book in which I uncover something new each time I read it.

The whole Kaiju (translated ‘strange beast’, but meaning giant monster like Gojira) movie industry without which we would never have seen Jack Reno make a joke about American instant coffee.

Ninjas of course, is there anyone who doesn’t think Ninjas are cool? Ninjas never go out of style. ANY story can improved with ninjas, they are like zombies in that way……mmmm…..Zombie Ninjas!

Rope work (Kinbaku) which goes so far beyond anything else I think some of the knots use mobius strips and cross over into some weird non-Euclidian geometry dimension on a topological level.

Also where would my late night TV experience of Deep Cable be without J-Horror, sure Korean-horror may have taken it further and Spain-horror has been putting out some kick arse stuff recently. But where would scary films be now without the influence of Ringu, Ju-on, Dark Water, One Missed Call & Pulse. We all know the tropes by now :vengeful ghosts; long stringy black hair; impossible physical gymnastics; meowing little ghost boys; cursed videos (or cell phones or computers); old rotted buildings and corpses; moldy books and newspapers; elliptical storylines (or a total abandonment of logic); creepy sound design; and creepy cinematography.

Then there is the Anime, so much anime. Enough to say if you don’t know who Deunan Knute or Major Motoko Kusanagi are, or if you don’t know who Astroboy (anyone else looking forward to the new movie), Gigantor or Prince Planet are then your childhood Saturday mornings were probably more active than mine. 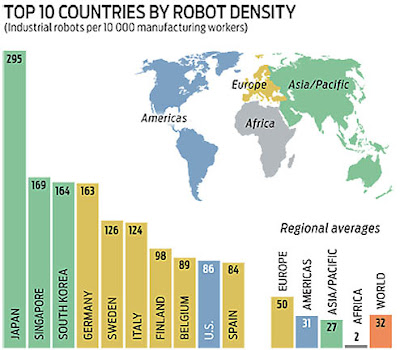 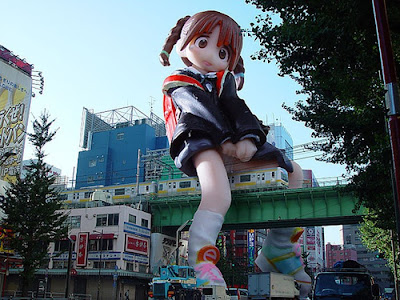 My Lunch with Bob

Well its 11:30PM, the_weapon and my_reason_for_living are bedded down for the night so the time is mine now.

I'll make this quick because now is usually when I get to wander the Post-Apocalyptic wasteland of Fallout3 or lay some cooperative smack_down on Zombies in Left4Dead.

Every couple of weeks GuruBob and I catch up for lunch as we both work in Melbourne's Central Business District. Bob has been an invaluable source to anyone seeking good each eats in this town. For the pass dozen or so visits we have tried different excellent eateries. Today we returned to the one we first dinned in.
You walk up an alleyway passing overflowing industrial bins whose odour mixes with the exotic spices of Chinatown. Inside the place was packed. The menu we got today were the ones that didn't come with pictures so we had to wing it. We observed many dishes on the surrounding tables and tried to order based on what these meals looked like.

"Oh on the menu they have crispy chilli pig intestine"

"That one comes in a big bowl, and looks like it has chicken, do you think that's Chilli Chicken Pot?"

Well we weren't disappointed, the food came and it was outstanding. The chicken was these tiny little clumps of deep fried goodness on thin bones passing through the chicken. More chick than chicken sized but there were lots of them scattered through out the plate.

Next time I will extend a general invite to those in the Melbourne CBD and take a camera. What I did do was save the left over 'vegetables' of the dish and took a photo when I got home. 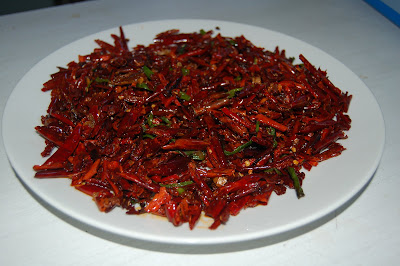 Looks like a bunch of coffee addicts to me

As a keen watcher of all things pandemic, which is but one thread of the rich tapestry that is the Zombie Apocalypse I could discuss the news of first recorded outbreak of Marburg Hemoraggic fever in the United States and all that forebodes.

Or perhaps the fact that a spineless, mindless jellyfish - the Turritopsis Nutricula have cracked the secret of immortality, something that continues to thwart our best endeavors.

or in a harbinger of the coming sentient machine uprising engineer Christopher MacLeod and his colleagues (species traitors ALL) at the Robert Gordon University in Aberdeen are providing machines with the ability to adapt their neural networks in a way that mimic's biological evolution.

But instead I wish to pose a question.

This morning my_reason_for_living, the_weapon and I were having a beverage while out. I ordered an Affogato. Since my_reason_for_living possesses a Y chromosome you would assume anything with chocolate and ice cream would get her seal of approval, but no.

"This is because you can not appreciate the subtle interplay for flavours and textures" I retorted.

"Yeah this from a man who likes things to taste either hot or caffeinated. A man who thinks cucumber has no taste". She quipped.

My question, does cucumber have any taste at all?
Posted by Unknown at 2:00 PM 12 comments:

On February 24th this year I hope to be lying in a hospital bed with my head swathed in bandages. Either that or unconscious, but no long term coma I need to be up and about in a day or two either Thursday or Friday that week.

Its all due to this: 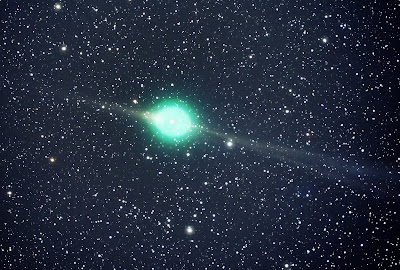 It's called Comet Lulin and NASA is saying its green colour comes from the gases that make up its Jupiter-sized atmosphere. Jets spewing from the comet's nucleus contain cyanogen, a poisonous gas found in many comets and diatomic carbon. Both substances glow green when illuminated by sunlight in the near vacuum of space.

That's all very well, but I recall another green light linked to a comet.

"...the Earth's orbit passed through a cloud of comet debris. You can even believe it if you like -millions did....
....it was reported in the news-bulletins during the day that mysterious bright green flashes had been seen..."

The Day of the Triffids by John Wyndham
So while normally the_Weapon and I would drive up to the hills to check it out with the reflecting telescope.

The Battle for Yonkers

A few folk have already written how this year is shaping up for some chock_full_ of_explosions blockbuster movies. I am of course keen for Terminator:Salvation to see Christian Bale's John Connor deleiver a righteous sentient machine butt kicking.


However next year holds the possibility of further cinematic awesomeness with Max Brooks 'World War Z' Movie being screenplayed by Babylon 5's J. Michael Straczynski and directed by Quantum of Solace's Marc Forster.

Which bodes well for the story, but what about what we are going to see on the big screen? Well Artist Daniel LuVisi has posted some tryout work he did to get a gig on the production team and it looks OUTFRAKINGSTANDING.

Its titled 'The Battle for Yonkers' and for those who have read the book know it to be a vital turning point in the story. Those of you who haven't read the book, ...I am very disappointed.

This is the battle where the military faced the zombie horde in a large scale set piece and got their helmets handed to them. Its a great sequence and will absolutely crucial to the success of the film.

I think if Mr LuVisi gets a guernsey on the production team we will be in good hands.

Big shout out to the ZOMBIE DEFENSE LEAGUE who last week tried to raise the awareness of the threat of Zed to drivers around Austin. Here is the story.

While some have speculated this is the work of ‘expert computer hackers’ I have my doubts that this is the sort of level of expertise needed. A few online searchers turned up –

“Apparently, while most road sign control pads are placed in a lock box, that box is rarely actually locked. And while most road signs are under password protection, that password is most generally just the default code "DOTS"—or you can easily reset the password by holding "shift" and "control" while typing "DIPY" (so that it just defaults to "DOTS" again)”.

Of course I would never condone such irresponsible behaviour.

Unless of course there were Zombies about.

Or it was time for zombie drill.

Or I was bored and had some spare time.
Posted by Unknown at 7:58 AM 9 comments: