Obviously its been a week to ban things Zombie 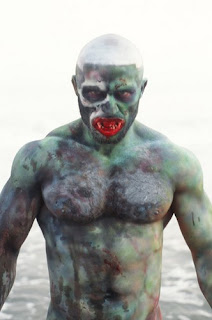 Most of you know Australians, at least on line. You’ve met some of us. Do we come across as a bunch on wowsers? I hope not. However this is the impression you get from our news. Our proposed internet filter, police seizure
photographic exhibitions or outrage at some overseas films.

Once again its Melbourne International Film Festival MIFF time and some how every year MIFF manages to stir up controversy, and I suspect sales, by hosting a ‘controversial’ film. You know the sort of film: foreign, extreme , probably only would have been seen by six people, often involving an erect naked penis. Normally I would ignore this but this year the controversy film they have is Bruce LaBruce’s gay zombie porn film L.A. Zombie. This week the Australian Film Classification Board (AFCB) director Donald McDonald sent a letter refusing classification for the film, effectively banning it.
The film follows an alien zombie who roams the streets of Los Angeles in search of dead bodies and gay sex - an activity that reveals a gift of ''shagging'' the deceased back to life.

So even with Zombies, I probably wasn’t going to see this one. But just because I don’t want to see full-frontal nude scenes and erect penises or zombies with cucumber-shaped penises which are clearly prosthetic, doesn’t mean I think adults who want to shouldn’t be allowed.

When I was in the UK I saw a tourist place called the London Dungeon – it advertises itself as “1000 years of dark history, 13 Shows, live actors and 2 scary rides” – an obvious destination for a seven year old who loves reading the Horrible History books. It seems the latest show ‘Bloody Mary’ was being advertised with digital billboards on the London Underground.

Four people complained that the zombie Queen Mary - complete with bloody gashes on her face, rotting teeth and red eyes - had terrified their children. As a result the UK Advertising Standards Authority (ASA) ruled that the poster should not be used again as it had 'terrified' children and breached fear and distress guidelines

Isn’t that what the stories we tell them are meant to do, cautionary tales so that they can be prepared to face the dangers of the world. Have any of these people actually read a traditional European children’s fairy tale? Read the stories in their religious texts? Or even a half way accurate account of Queen Mary’s reign? How else can we prepare them to face the wandering mutant zombies hordes in the ravaged wasteland of the apocalypse if we don’t tell them the right stories with startling moving images, preferably in 3-D.
Posted by Unknown at 9:42 AM 8 comments:

Look What I've been reading, and no its not After America

Apologies for the hiatus in posts, I was riding my motorcycle to work and got clipped by a truck, even with full leathers, helmet and boots I was a bit banged up and have been recovering. Many thanks to those who called/posted it cheered me up when I was feeling pretty down. Hope I never have to return the favour.

In Zombie News I was very kindly sent a copy of James Phelan’s Alone by the Author. This is the first in his new series Chasers. Nothing I am about to tell you that you can’t find on the back of the novel.

carriage is rocked by an explosion. Jesse and his three friends, Anna, Dave and Mini, crawl out from the wreckage only to discover a city in chaos. Streets are deserted. Buildings are in ruins. Worse, the only other survivors seem to be infected with a virus that turns them into horrifying predators

It was a cracker to read, I particularly liked that these teenagers are savvy 21st century types who have grown up with a culture saturated with the post apocalyptic and how to survive it. At one point a character is asked how he knows this stuff, about "..fallback plans, especially once we leave here; more weapons, just in case.." to which his response is "Playstation, XBox'. This exchange sums up why this story works and so many other stories of the surviving the zombieapocalypse just annoy me. The protagonist doesn’t make a mistake, knows what to do and thinks things through logically for the horrific but not unforeseeable situation.

It’s a pacy little thriller I finished in one sitting which I think is a testimony to the author’s readability. My one complaint is that I have to wait until 'late 2010 to read the next book. Survivor.
Posted by Unknown at 5:31 PM 13 comments: