A great night thanks bob 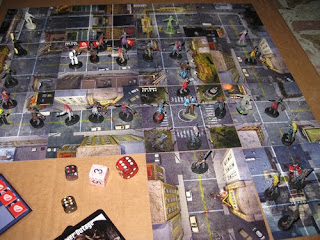 A great night was had on the weekend, GuruBob was bacheloring so the call went out and Myself, the_weapon and gentleman John rallied around for a couple of hours of curry and boardgaming.

Beginning with the old staple - ZOMBIES

GuruBob looked like he was going to stroll off to the helipad until he suffered a brain freeze and wandered through a police station full of zombies. It was gentleman Johnathon in a stylish evening suit as he waved farewell to us out from the rapidly fleeing chopper as we fell under a wave of undead.

Then onto Arkham Horror
In deference to the_weapons underdeveloped liver we forwent the Advance insanity rules. For those unaware, and it is unlikely that either of you that read this haven't yourself played the odd game in the past, a quick recap.

The game is loosely based on the writings of HP Lovecraft's worlds of unspeakable (but obviously not unwritable) eldrich horror he spun back in the 1920s. You play characters who travel around a town and try shut down portals to other alien dimensions seeking allies, clues and tools whilst battling terrifying nightmare beasts and cultists with many visits to hospital and insane asylum to recover while the doom edges closer. A co-operative effort which saw the Miskitonic campus security, the FBI and the towns own police more effective at killing the monsters than our team.

So anyone who is a big fan of the writings, one of the great nightmares is the crawling chaos Nyarlathotep - He is a horror with infinite shapes, the soul and messenger of the Other Gods 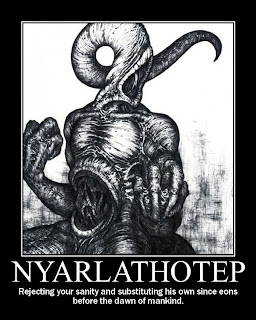 "And at last from inner Egypt came / The strange dark One to whom the fellahs bowed...And through this revolting graveyard of the universe the muffled, maddening beating of drums, and thin, monotonous whine of blasphemous flutes from inconceivable, unlighted chambers beyond Time; the detestable pounding and piping whereunto dance slowly, awkwardly, and absurdly the gigantic, tenebrous ultimate gods — the blind, voiceless, mindless gargoyles whose soul is Nyarlathotep."

so everyone got that, nameless, sprawling chaos of horror something like this.....

In his In his first appearance in "Nyarlathotep", he is described as a "tall, swarthy man" who resembles an ancient Egyptian... so he can take human form, however 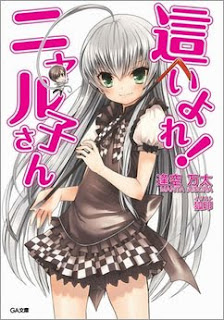 On one of the anime blogs I came across this - a 'high tension chaotic comedy of light novels are being adapted into a Falsh anime project called Haiyory! Nyaru -Ani

The story centers around Nyarlathotep, a formless Cthulhu deity who can take on the shape of anyone it wishes, but particularly the shape of a seemingly ordinary silver-haired girl. Mahiro Yasaka is a normal high school student who is chased by aliens one night, until "Nyaruko" saves him. Seen as depicted on the right.


I realise he can take whatever form he likes but seriously the crawling chaos is walking around as a preteen girl? Being unaware of the amount of terror and destruction a preteen girl can unleash I turn to you to ask is this an unreasonable form to take?