I bet you wish you'd thought of it 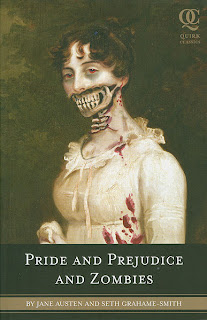 Pride and Prejudice and Zombies.

Given the elephant bucks it made, how little work it took to insert ninjas and zombies in to a long since out of copywrite text Quirk went on to try to fill a whole shelf load of these, like 'Sense and Sensibility and Sea Monsters'

Honestly there are publishers and writers (authors are successful enough not to care, writers are folk who have to take any work offered to make money) kicking themselves that they didn't think of this.

While Seth-Grahame Smith has tried to move, a least a couple of genre shelves along at the Borders books store from the monster success of PP&Z with his alternative history novel

and with talks of a movie staring Padme Amediala (sorry Natalie Portman), It was inevitable we would return to the novel which started it all.

Quirk have announce a Prequel

Now I love a prequel almost as much as I love have my fortune read. Charlie Jane Anders the IO9 blogger had eloquently expressed what annoys me about prequels in her piece Prequels aren't just dumb, they're Evil. So I was probably going to let this one slide until I saw the fanficmade trailer for the book.

Now I have watched A LOT of zombie movies and some, perhaps many of them are woeful.
This one I liked.

We got it right this time 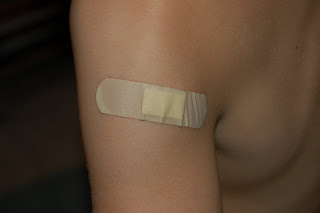 Today I took the_weapon to get the latest influenza vaccine that's become available this past week at the local medical centre. For $14 not only does he get increased protection against the (hopefully) upcoming seasonal flu but it also includes the H1N1 Vaccine so he has some protection against swine flu as well.

As a fan of those films where threats to humanity are faced off by steely eyed, squared jawed, well trained and well resourced team of professionals who have plans and contingencies ready to enact at the first sign of a threat. So I was kinda pleased how the health community and the public organised in response to the threat swine flu posed.

I realise its not over yet and some will claim that it was no big deal and we over reacted. To those I offer the following from the latest Australian Influenza report

Or as more graphically put by the CDC in the United States. 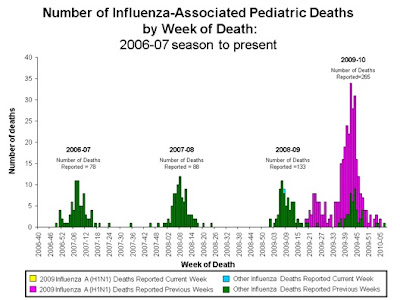 For a parent these are chilling numbers, but they are only numbers. The late epidemiologist Irving Selikoff once referred to a statistic as "people with the tears wiped away." A friend, referring to someone who lost a child, shook his head and just said, "It's off the scale."

Flintheart over on his blog was talking about "The thing is, Stupid only has to win big once, and that's your whole fucking life trashed, right there" I have to say we as a society are doing the stupid when we allow vaccination levels to drop.

I was hearted to hear from the receptionist behind the counter that they had been really busy with people getting vaccinations. There is hope yet for us as a species. Jim Carrey and Jenny McCarthy notwithstanding.
Posted by Michael barnes at 8:57 PM 2 comments:

The past couple of weeks the_weapon and I have been getting up at sparrowsfart to get him in for training. He is on the Falcon Academy team swim and they got through the district competition and on to the zones and regionals.

At the last meet I was sitting with the_weapon while we watched the team swim. One of the girls in his class MissyK was swimming. MissyK is from a family of evangelical Christians so in the past she has invited the_weapon along to her church. Needless to say being raised by a militant atheist he chose to decline, repeatedly.

MissyK swam stone dead last in her heat and she was pretty broken up about it, visibly upset as she got out of the pool and walking back. The_weapon got up and started to head over to her. I though what a caring, empathetic child I had.

I then remembered this is my child I was thinking about.

"No asking, where is her messiah now, okay?"

The look on his face confirmed my suspicions. Fortunately by now one of the teachers was providing solace to distraught aquatic Christian.

So I think we have passed on the family value of atheism. As such I am excited that the Global Atheism festival is coming to Melbourne. Not enough stuff to hold a 10 year olds attention but still plenty happening around town like the atheism bus 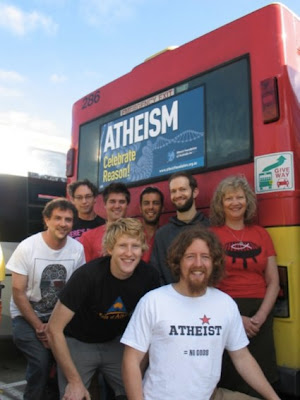 and I am comfortable with that. What about you folk, any traits your family's have you want to ensure are passed on. Musicial talent, freakish recall of sporting minutia, ability to roll your tongue into a tube?