Its better with Monkeys

As you may have guessed I am a massive fan of science, maths, engineering and technology.

In my fiction I'll take rayguns over wizard staffs; in my NEWS I'll twitter the Large Hadron Collider before I follow our prime ministers; and at cub scouts I'll demonstrate how to make carbon dioxide volcanoes over Christmas wreaths. My geek-fu is strong and science is so cool right now. Any one else notice in the US president Obama's speech on the 'Educate to Innovate Campaign' not only did he have Adam and Jamie from Mythbusters there but he put those sentient machines on notice -

"As President, I believe that robotics can inspire young people to pursue science and engineering. And I also want to keep an eye on those robots, in case they try anything". Full speech here.

So for my family movies I'll take 'Cloudy with a Chance of Meatballs' over a misbehaving Max in a wolf suit. 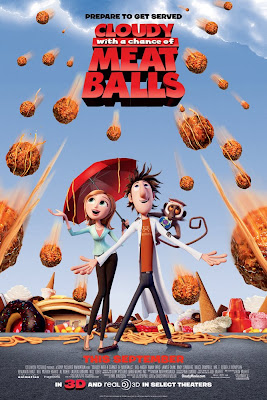 The film is based (very loosely) on the Judi and Ron Barrett 1978 book. Instead the movie is an origin story, (SPOILER ALERT) with an unappreciated inventor type called Flynn who hummed his own action soundtrack when he moves through to his lab. This was so cool I now do this whenever I enter the office at work. He invents a number of things which become (in one case literally) running gags through out the rest of the movie.

They have chosen to go with The Incredibles style CGI for the characters thus avoiding the whole uncanny valley problem with animated people. 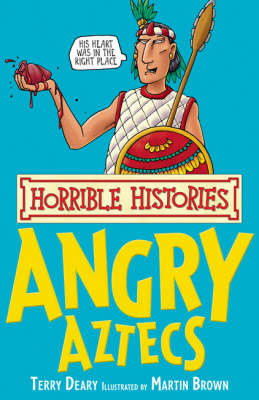 I found the story bright, colourful, fun and science can do great things as long as evil mayors are not involved. The_weapon is reading about the AZETCS at the moment or at least the horrible history bits of the AZTECS so he (SPOLIER ALERT AGAIN) went wild when Steve ripped the heart out of a person sized gummy bear and ate it.

I walked out thinking it was a great big great thumbs up for my Science is AWESOME philosophy. My_reason_for_living wondered if I missed that it was science that causes all the problems in the first place. I considered and replied - but it fixed it! The_weapon laughed through out much of the film but when we left he seemed quiet. When asked he replied he was thinking about 'the sad bit'.

I have no idea which was 'the sad bit' and he said he didn't want to talk about it. But he then said he really liked the movie. This has left me with the question.

What was the sad bit?

and does this mean my almost ten year old son is more emotionally developed than me.

Is this behaviour insane?

How many times do you have to repeat the same behaviour, each time expecting a different outcome and yet each time the same thing happens. How often before you realise its not ‘sticktoitness’ but insanity?

Supporters of sports teams are constantly doing this with their promise of ‘next year we’re going to win it all’. Gamblers looking for the next sure thing, or even serial marriers, “no this time its true love, as they marry their fourth wife”.

Well include me in this pattern of insanity too.

Each year around mid November I set my alarm, go out in the middle of the night in either a field, or any nearby open space where there are few or better no lights and look up towards the Northeast end of the sky around the sickle of Leo which is a curved asterism that marks the head of the Great Lion.

And for the past eight years I have only seen either: Clouds, dusts, a faint glow of light pollution, one year I even managed to get hailed on. How can the sky be obscured –Melbourne’s in the middle of a fraking HEAT WAVE, its not like the clouds are rolling in. So this is what I have seen, but no meteor shower of around 100 to 500 meteors per hour. 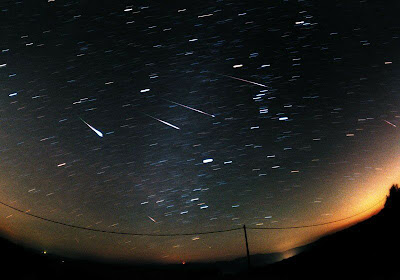 So why do I keep getting up and doing this, is it some form of obsessive compulsive behaviour previously undiagnosed?

Because in 2001 I got up to see the Leonids Meteor Shower (called this because it seems to originate from the constellation of Leo) and it was SPECTACULAR. Reports put the rate at 3000 meteors per hour.

This was not just a meteor shower.

Whenever the number of meteors exceeds 1000 per hour its called a meteor STORM. And as incredible that was it can be even better. In November 13, 1833 number of meteors exceeded 1000 per minute. Now the one I saw in 2001 wasn’t as much as that but still better than any fireworks display and amazing example of the terrifying beauty of the infinite cosmos I have never seen.

That’s why I get up.

That’s why I will keep getting up.
Because I want to be standing in a field in the middle of the night with the_weapon standing beside me and I want him to look up and see the wonder.
Posted by Michael barnes at 2:52 PM 10 comments:

Sorry for the NSFW title, but I figured if your filters are as undiscriminating as mine are at work this post was never going to get through anyway.

Its the scenes where people with expertise, experience and knowledge gather and argue a point. It can work one on one like Vader in Star Wars: A New Hope, Ghost in the Shell had buckets of it, The West Wing had some great scenes where they'd argue out some point each character displaying their breath of knowledge, also BSG had some great briefing room competency. Also its nice to see some one who is wrong smacked down using competency.


Why does it appeal to me?

I think its having worked in a variety of jobs my fantasy is now just to have bosses, leaders or colleagues that I can count on to do their jobs well, make choices of staff based on ability and competency not because they like the same jokes as you do, and make decisions based on reason and not expediency.