So I propose to add another to the list for June, a day to recognize the ceaseless vigilance of those who stand ready to face the shambling hordes of the undead. I want to declare June 23 International Zombie awareness day.

It was on this day in 1983 a low budget horror flick directed by Sam Raimi was premiered, the film Evil Dead gave us the greatest Zombie hunter of all time

The plot of the film is simplicity itself, a bunch of young adults go to an old cabin in the woods and each is killed, -horribly. A friend at the time directed after a late night showing 'get that thing, outa my video' -yes kiddies movies once came on black book shaped things called videocassettes.

The film spawned two sequels: Dead by dawn & Army of Darkness, a musical, computer game, a marvel comic book, many guest spots, Ash even made the list of Top 100 Heroes of All Time, describing him as "An egomaniacal, complaining, misogynistic goon, Ash is the best demon and zombie killer ever to be portrayed on the silver screen" and made the actor Bruce Campbell that played Ash welcome in any zombie hunter convention in the world.

Campbell himself said Ash is 'A bad slow thinker, but a great fast thinker' and 'Ash is pretty much incompetent at anything other fighting the evil dead'. He seems pretty ingenious to me such as making a chainsaw bracket and shotgun harness, gunpowder from mainly referencing its elemental makeup in a chemistry book, and a fully functional prosthetic hand from a metal gauntlet.

But he cemented himself into the annuals of zombie hunter fandom with bolting a chainsaw to the severed stump of his right hand and at the end of the second film standing in a barren wasteland with his trade mark sawed off double-barreled 12 gauge Remington shotgun and chainsaw surrounded by the evil dead. 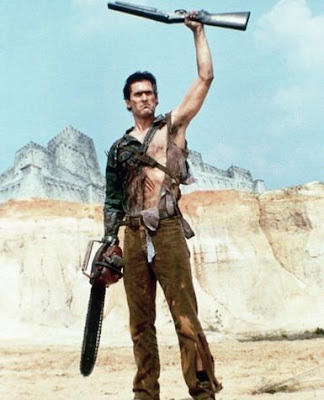 "Hail to the King, Baby"
So June 23 International Ashley J. Williams day, whose with me?
Posted by Unknown at 5:45 AM 23 comments: