Vegemite is described on the Kraft food website as a "tasty spreadable paste made from brewer's yeast".In Terry Pratchett's 'The Last Continent' it is better described as a "salty-tasting beery brown gunk."

It's a thick, black paste that will provide a valuable source of vitamin B in the post-apocalyptic landscape because:
every home has a jar;
it doesn't need to be refrigeration;
I suspect it is largely immune to radiation; and
it is so salty that only extremophiles can survive in it so it will never go off.

The name was chosen in a national contest in 1923 and somehow it has so insinuated itself into the Australian cultural landscape that an ability to eat it on toast was considered a defining characteristic of being Australian, even though it is now owned by the big American food giant KRAFT.

Given such iconic status you'd think you'd be more careful how you treat the brand. Sinc
July this year Kraft sent out three million jars with the label "name me" and asked the public to send in their idea for the new Vegemite & cream cheese mix mmm YECH. 50,000 entries were received. A website posted the names and people began to generate the sort on-line buzz that suggested KRAFT had understood the new media and social networking.

and then KRAFT decided that the name would be 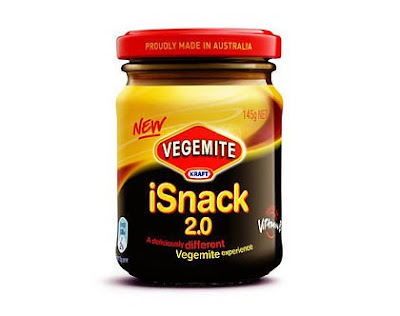 So in an effort to stem the firebombings they have now gone with VEGEMITE CHEESYBITE.

However with the internet, like Cuthulu do not call up that which you cannot put down.

Which has led to the following.