Its War of the World WITH ZOMBIES

I’m sticking by my review on Amazon of Seth Grahame-Smith’s Pride and Prejudice and Zombies, this book is a million times better than the original.

It seems that enough folk were as hot as I was for a literary mash up that includes zombies to earn, what is known in the biz as Elephant bucks for the small publishing press Quirk books. As of this week its 10th on the New York Times paper back trade fiction bestseller list, #15 on Amazon and according to the trade mag Publisher’s Week Quirk has more than 120,000 copies in print.

So is it a surprise to anyone that publishers are scrambling to get out more of these literary mash-ups?

Of course the author Seth Grahame-Smith has been handed a sack of cash by Grand Central Press, reputed to be over half a million, to write Abraham Lincoln: Vampire Hunter. This may address one of the concerns Flinthart raised in his review about “Grahame-Smith is so concerned with mirroring the original material that the impact of his ‘Now With Added Zombies’ version is all but lost” as there is no such detailed original text.

It doesn’t end there because Coscom Entertainment have released The War of the Worlds: H.G. Wells's Classic Plus Blood, Guts and Zombies. How cool is that! 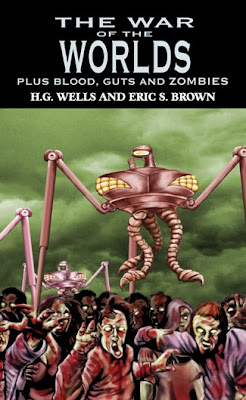 The invasion begins . . . and the dead start to rise. There's panic in the streets of London as invaders from Mars wreak havoc on the living, slaying the populace with Heat-Rays and poisonous clouds of black smoke. Humanity struggles to survive against technology far beyond its own, meeting fear and death at every turn. But that's not the only struggle mankind must face. The dead are rising from their graves with an insatiable hunger for human flesh. Friends, neighbours and loved ones lost to the war of the worlds are now the enemy and the Earth is forever changed. It's kill or be killed, if you want to survive, otherwise you might become one of the walking dead yourself.

These sounds like pitches that come up during a game of ‘Grave Robbers from outer space’.

From Z-man games it pays a tongue-in-cheek homage to the Horror and Sci-Fi B-Movies we all love love to hate…or hate to love. Players are making a B-Movie by playing Characters, Props, and Locations in their movie and sending Creatures to attack the other players' movies in order to kill off their Characters. With cards like “You’ve seen her breasts so her character must die” or “Cabin in the woods – did you leave the door open”. When Roll the Credits is played, the player with the most points wins!

I can only hope this trend for mash ups continues. I’d always though that TV series should have cross overs -like Firefly meets Star Trek, or Lost characters wander into Law & Order. Zombies of course remain an untapped resource. Hamlet’s father as a walking undead or imagine the Hunt for Red October with nazi zombies rising from the bottom of the sea.