In crappy news for Zombie fans 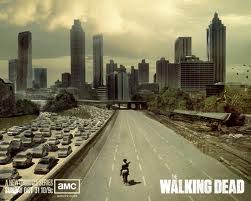 Last year the big standout hit for the network was their TV series THE WALKING DEAD, based on the awesome ongoing comix book series by Robert Kirkman. The series which premiered on Halloween last year attracted 5.3 million viewers, its season finale drew more than 6 million. Its one of the most successful television series ever produced by the network. In the coveted 18-49 demo is is the biggest numbers of any drama ever shown on basic cable. So what does a success like this breed.

The director Frank Darabount was sacked three days after the company used him to promote season 2 at comic con. They slash the per episode budget available from $3.4 to $2.75 and come up with a series of bone headed suggestions to the save cash.

"The show shoots for eight days per episode, and the network suggested that half should be indoors" and insider points out "this is not a show that takes place around a dinner table". Another suggestion "couldn't the audience hear the zombies and not see them saving on make up?"

needless to say I am no longer looking forward to the see what this has wrought for season two. 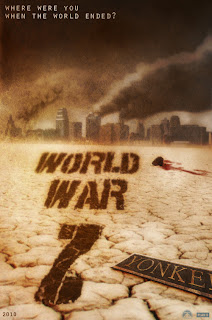 And next in the kick to the head in stupid ideas


A synopsis was released by for the movie

"The story revolves around United Nations employee Gerry Lane (Pitt), who traverses the world in a race against time to stop the Zombie pandemic that is toppling armies and governments and threatening to decimate humanity itself.  Enos plays Gerry’s wife Karen Lane; Kertesz is his comrade in arms, Segen.”

serious WTFage????? Have they not read Max Brooke's book? Here is how the book is described


Brooks plays the role of an agent of the U.N Postwar Commission who published the report a decade after the Zombie War. The United Nations left out much of his work from the official report, choosing to focus on facts and figures from the war rather than the individual stories that form the bulk of Brooks' novel. The interviews chart a decade-long war against zombies from the view point of many different people of various nationalities. The personal accounts also describe the changing religious, geo-political, and environmental aftermath of the Zombie War.
AFTER THE ZOMBIE WAR NOT DURING and it is not just me who noticed they have fundamentally changed the story.

Io9 "WWZ movie synopsis is nothing like the book, internet melts down

Peter Hall over at Movies.com sums up the problem best. "I Hate you Mac Foster. "
Me too.
Posted by Unknown at 11:15 AM