My internet alert for Zombies turned up this over on P Z Myers website.The journal Diabities Care Vol 17, Issue 2, 152-154 has an article in the December 2010 issue by M.M. Tai called


'A mathematical model for the determination of total area under glucose tolerance and other metabolic curves'. 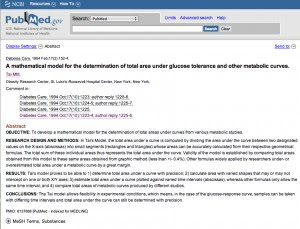 Which is all well and good however from the abstract:


OBJECTIVE–To develop a mathematical model for the determination of total areas under curves from various metabolic studies. RESEARCH DESIGN AND METHODS–In Tai’s Model, the total area under a curve is computed by dividing the area under the curve between two designated values on the X-axis (abscissas) into small segments (rectangles and triangles) whose areas can be accurately calculated from their respective geometrical formulas.
This sounds a lot like high school calculus to me. If you replace Metabolic curves with just curves then Dr Tai has stated the Trapezoidal rule one of the first techniques taught to calculate the integral (area under the curve). Which as we can see has many uses, not just total glucose tolerance. What is cheeky is the author has called it Tai's method, not the Leibniz or Newton method. Whats also impressive is that on google scholar the article has been cited 135 times. Which for published articles reproducing known mathematics is a lot. Scientist in some universities live and die professionally by the citations their articles garner. I am hoping this article is being cited as an example as why interdisciplinary studies are important.
It was Murray Gell-Mann who used the 'eight-fold way' (hippy) to explain the spectrum of hadrons (fancy word for subatomic particles like protons & neutrons). It was only after mixing with mathematicians, promptly pulled out 'Introduction to first group theory' that allowed Gell-Mann to open up symmetry and group theory to become one of the fundamental tools of particle physics. In his defense group theory wasn't taught in high school in the 1960s.
I don't mean to be snarky on Dr Tai, actually I do, but its probably because I am feeling a bit snarky about the whole 'science in society' thing at the moment. Especially after hearing the conversation of customer in front of me in the Australian geographic shop: 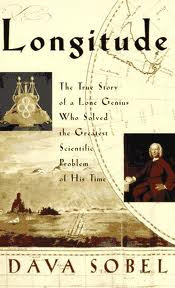 "excuse me why is this clock reading GMT what is that?"
"thats the Greenwich standard time to which we adjust our clocks"
"So thats the time in London is it?
"No, thats the time in Greenwich"
"Why whats so special about Greenwich"
of course I had no alternative but to beat them to death with a copy of Dava Sobel's Longitude.
Posted by Unknown at 8:44 AM