Whats your nightmare vision of the future

I been a fan of Dr Daniel H Wilson for a while now. Does anyone know why do the news/blogs leave off his title. The man has a PhD in Robotics from the . Is CMU some sort of clown college or one of those one-shed divinity mills? I don’t understand why in all the links about him they don’t put on the Dr. If they are worried he might be confused for a sawbones put a Ph.D at the end.
I suspect its because he writes in an entertaining, popular way books like: 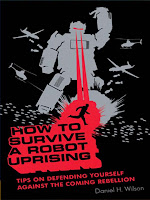 personally I am stocking up on supermagnets and thermite and reading over this wired article How to terminate a terminator. 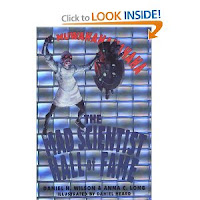 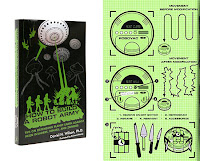 So yes I am big FAN of the good doctor's work and have been awaiting his next book, due for release June 2011 called Robopocalypse: A Novel. Which to date all I have been able to determine is

A Novel of Human Survival during an apocalyptic robot uprising, sound like a RomComRob doesn't it?

Given that the treacherous sentient machines turning against us is my number 2 vision of the nightmare future, right after the rise of the walking dead, and just before the spread of a Captain Trips like supervirus, this book is eagerly anticipated.

Now it seems I am part of the zeitgeist as this week it was announced that Steven Spielberg has been named as a director for the film of Robopocalypse. And Jack Black will being involved in the movie version of How to Survive a robot up rising.
Seriously with World War Z movie in production I am looking forward to some serious apocalyptic filmage in the next couple of years. Any other moives I need to keep an eye on?
Posted by Unknown at 1:59 PM