Any book which has George Romero honored as savior of humanity and talks about his shambling re-animated corpse locked in a government research centre is ahead in my book, abiet a severed and rotting head. 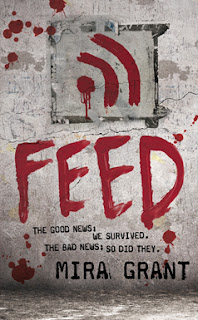 FEED by Mira Grant AKA Seanan McGuire, (you'll never see them in the same room together, is the first book in the NewsFlesh trilogy to which all I can say is: Get cracking woman I want the rest of the story.

The world Ms Grant has built is set 20 years after the rising when an experimental cancer therapy combined with genetically engineered flu virus designed to give immunity to the common cold with one heck of a side effect - It raised the dead.

The amount of thought Ms Grant has given to the sort of world after 20 years of zombies giving rise to infection is impressive. The consideration of the fact that when anyone or decent sized mammal dies it re-animates shows she has spent a lot of time researching the kind of stuff I love to read about: Virus, disease control, emergency response planning and of course the best weapons/ways to take down the dead.

Sarah Palin's America has come to past with Alaska having been surrendered to the zombies, designated a zone 1.  From the book:

“They can only legally bathe you in bleach for a half a minute unless you’ve been in a Level 2 zone. At that point they can keep dunking you until they’re sure the viral blocks are clean. Travel in a Level 1 zone mean’s they are not legally obligated to do anything but shoot you”


The protagonists are a brother sister team of news bloggers following the presidential campaign, but its the attention to detail of the world she builds that I most enjoyed. Sure its a world where you survive the car crash only to face a bite from a passenger who died and reanimated, because everyone carries the virus- it just doesn't activate unless you die or get exposed to activated virus. It's also a world where children want to grow up to be leading virologists, the most trusted institution is the CDC and nurses stations are hardpoints.

"A good medical duty station can provide an island of safety for the uninfected, even as an outbreak rages on all sides. If you airlocks don'y fail and you have enough ammo, you can hold for days. One duty station in Atlanta did exactly that - four nurses, three doctors, and five security personnel kept themselves and eighteen patients alive for almost a week before the CDC was able to fight through the outbreak and get them safely out". 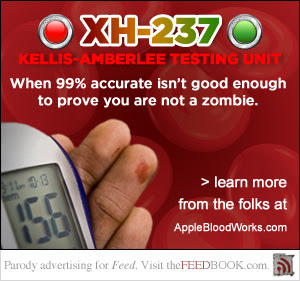 One negative point for me is that all the blood testing units that people carry are 'Apple' which conjures up brightly colored plastic equipment that is a triumph of style over substance.


I guess for a book about bloggers no one would be suprised the book has its own website, click here it carries a nice line in pseudo advertisements.

The bond between Georgia and her brother Shaun is a dynamic I hope we get to explore in the next book Deadline due May 2011.


But what I found best about FEED? In a genre that tends towards  the bleak and sad, and don't miss-understand there is enough tragedy and despair in this tale to satisfy a teenage Emily Dikinson fan. People die in this story, good and bad, important and minor. In its willingness to kill off people it reminds me of that another great Zombie narrative The WALKING DEAD. But after 20 years of a horrific plague that has touched EVERYONE the human race is surviving and adapting. That no matter what may come or how horrible it will be humanity can make it through.


Thats why its the zombie story I have enjoyed reading the most this year.


Oh and if the dead do walk and you run into a woman called Mira, do what she says and you might just make it through the rising.