With this must irony….. 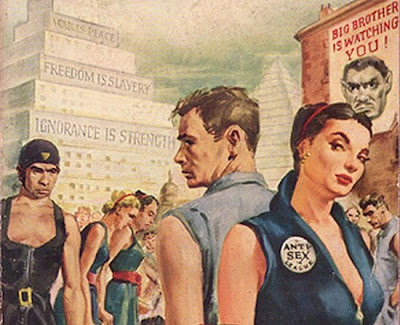 …….. surely it must be a carefully thought out marketing strategy.

It's something of a worry for me as this year after having to pack up all my books for a move I promised myself that I had purchased my last hard copy book. (Emergency by Neil Strass if you are interested) I had heard good things about the Kindle, admittedly all about the US edition with its wireless capabilities, but so much so I was considering handing over the hard earn readies when it was picked up by an Australian distributor.

But after Amazon’s tanty last year attempting to remove listings on ‘Adult material’ but which seems to have selectively and disproportionaly targeted authors of homosexual, gay or queer writings as covered in Flinhart’s blog here.

Now this latest stunt. You wonder if Amazon has been bought out by the fundamentalists.

Surely someone at Amazon is self aware enough to have realised to retrospectively try and remove a book you purchased from you, which was described by one of the readers of David Pogue’s Tech Blog at The New York Times “….it’s like Barnes & Noble sneaking into our homes in the middle of the night, taking some books that we’ve been reading off our nightstands, and leaving us a check on the coffee table..”. is particularly rediculous when it involves books that as a theme talk about cencorship and control of knowledge.
What’s next, wiping out copies of Bradbury’s ‘Fahrenheit 451’ with a little flaming icon on the screen while it was removed.
Though its all over who owns the rights to republish electronic copies of Orwell’s books needless to say I am rethinking my plans to purchase a Kindle as my eBook reader. Scifi’s Scott Edelman has quipped - As Orwell once wrote, "Freedom is the freedom to say that two plus two make four. If that is granted, all else follows." To that we add, freedom is the freedom to keep the book we paid for.
My favourite news quote so far about this is by Seattlest’s “Amazon's Kindle--Now with New Take-Backsies Feature”.

Anyone got any e-book readers they would suggest?
Posted by Unknown at 2:24 PM