I realise its a foolish question when the obvious answer is coffee.

I want to say I respect those of you who choose to drink tea, but I can't. Unless it's the post apocalypse and you weren't adequately prepared. You are searching the rubble and in that last ration box before you go into terminal caffeine shutdown you just have to drink tea. In which case shame on you.
Unless its one of those fruity caffeine free herbal teas in the box. There is just no reason to drink those, ever! even in the post apocalyptic wasteland or Earl Grey - Captain Picard be damned.

While there is much waffle written about the way tea is prepared, waxing rhapsodic about its origins, history blah, blah.

"the budda discovered tea when he found it picked him up after spending the day mediating...."

what a powerhouse of a drink, being able to revive someone after a hard days thinking. Given the simplicity of the the process it is easy to see why tea was invented early in our history. Its so easy hippies can do it.

Over the years tea swillers have tried to make the process more interesting. Bizarre rituals - see the milk in first controversy, pickling it, having to wear uncomfortable pants while you make it such as in Japanese Tea Ceremony and I don't want to know what goes into those black malteser sized tapioca pearls in bubble tea drinks. shudder. Attempts to add some engineering goodness to the process of tea have at best resulted in Samovars which are just about making hot water. The 3000 year old version of one of these.


But trying to dress it up as much as you can its still dried leaves in boiling water. This is why when I think of tea all I can picture is  Hippies.

I'm not saying if you drink tea you are a hippy, it's just that's the image that is called to my mind whenever someone offers me a cup of tea. Plus the smell.


COFFEE on the other hand, calls to mind images of industry, steam engineering and madness.

Such as the great Victorian engineer Isambard Kingdom Brunel calling for coffee as he carries a temporarily overwhelmed Ada Lovelace through the vice and verse ridden poet's corner of London. For more of the thrilling adventures of Lovelace and Babbage go here.

Real coffee, and by real coffee I mean espresso, is made through a much more exciting process of drying, roasting and in special cases the beans being eaten and shat out by the Asian Palm Civet (Paradoxurus hemaphrodutis), then pushing water heated to around 96 centigrade through a sieve of the ground roasted coffee beans at around 9 bars of pressure.

and perhaps the finest expression of this symphony of engineering and madness with coffee in the real world, is a mystic brew called Black Blood of the Earth. It's produced by a company by a chap at Funranium  Labs who after sampling a cup produced by a Viennese Triple Cold Extraction Coffee set up in Japan

described the experience as

"I could see colours that weren't in the visible spectrum, and could vibrate through walls"

and with access to a decent supply of glassware and a passable knowledge of chemical engineering Voila, he built his own machine and with continual tinkering  produced Black Blood of the Earth -a beverage which concentrates the caffeine but extracts much of the bitterness inherent with the beverage. The caffeine content per cup is a touch excessive and I tend to like my coffee dark and bitter, like my heart, so my search  for the perfect coffee continues.

The  pinnacle of beverages, the ULTIMATE coffee will result in such experiences as described below from the comic Girl Genius, click here for the full tale

So in summary when I think of tea, I see hippies. When I ask for coffee I want it to be prepared using this 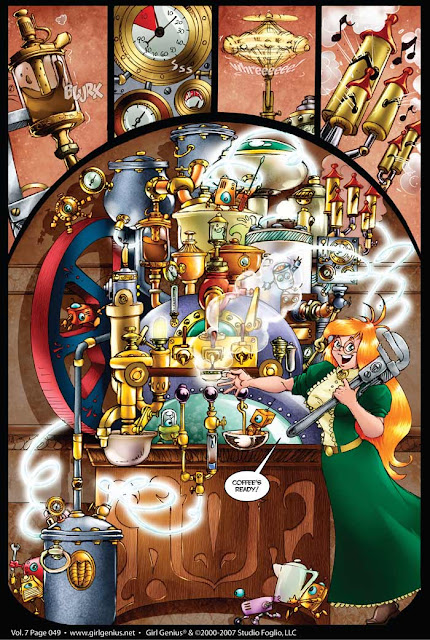 so what's your beverage of choice? and why isn't it coffee?