Why I liked OUTCASTS more than I am enjoying TERRA NOVA

As others have noted, thanks Orin, next year will be the first time since 1974 that there are no live action space based science fiction shows on Television. This of course is unacceptable. While science fiction on TV thrives the future looking science based tomorrow seems to have disappeared and instead we are stuck with inward looking, supernaturals and superpowers. For comparison look at the fate of BBCs short run series OUTCASTS and compare with the finally on air TERRA NOVA. 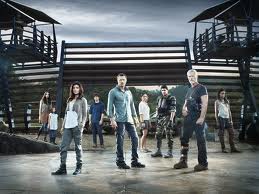 Terra Nova is about a colony sent from a future earth that has a destroyed biosphere due to environmental collapse. The colony is settled in series sent through a time fracture to a prehistoric earth. The trip is one way and they can not contact the future and rely on the information carried back by settlers.The sixth wave of settlers had a dispute and leave to set up an alternative colony elsewhere on planet. The character selection process is meant to bring the best and the brightest but there are obviously flaws and some people have go through that shouldn't.There is a whiny, annoying teen whose sole task seems to be a plot device to drive the story when he does something stupid.  There is a big mystery hinted at by some cryptic markings. Not everything is what it seems.

Outcasts is about a colony sent from a future earth that has a destroyed biosphere due to environmental collapse. This is a alien world reached over a number of years by a series of colonizing ships, News from earth can only be provided by the people on the ships as they arrive. Engineered humans called Advanced Cultivars were part of the first settlement teams but where blamed for a disease which wiped out most of the colonies children, they left to found another colony elsewhere on the planet. There is a whiny annoying teen who only function seems to screw with the emotions one of the competent officers in the colony. There is a big mystery hinted at when some hominid fossils that turn up. Not everything is what it seems.

For a start at least OUTCASTs had spaceships, big honking planet settling spaceships. It had a colony that looks like it had been build from cannabilized spaceships ' The houses on Terra Nova look like they could double as an Apple Store. And while TN has dinosaurs and that is a plus they aren't anything that wasn't perfected by the Walking With Dinosaurs crew.

Also given a disease that wiped out most of the children mean they aren't up to their shoulders in annoying teen angst every week unlike Terra Nova. So a plus to OUTCASTS there.

Even the title TERRA NOVA sh*ts me. That translates as Earth New. Not a very imaginative title requiring no great geek knowledge. The planet in Outcasts is called Carpathia which is never explained, no block of  talking exposition but as everyone knows Carpathia was the name of the ship that rescued the survivors of the Titanic. See clever. So of course it only got eight episodes and ended on a cliff hanger that will never be resolved.

Even in the first episode of TERRA NOVA they screwed up the maths on how big the moon should be, hint it shouldn't be THAT BIG.


So the little girl asks her big sister, "Is it always so big?"

Big sis: "Not always. It moves about a half a centimeter away from the Earth every year, so it’s much closer than it was yesterday."

UH UH.
The moon does move around 4cm/year, it was moving away a bit slower millions of years ago but lets assume 4cm/year close enough for government work. Therefore how much closer 85million years ago thats 425 kilometres. Given that it currently orbits at around on average 400,000kms thats a tiny variation about 0.1%. Since the moon travels an ellipitcal orbit over a two week period is varies by about 50,000kms every fortnight there is NO WAY that the could percieve a difference. So once again SCIENCE FAIL.


Terra Nova has only had a couple of episodes so far but its not looking good.
Posted by Michael barnes at 7:48 PM